Creating Heroes: Ten Ways to Reveal the Heroic Qualities of Your Character - Part 1 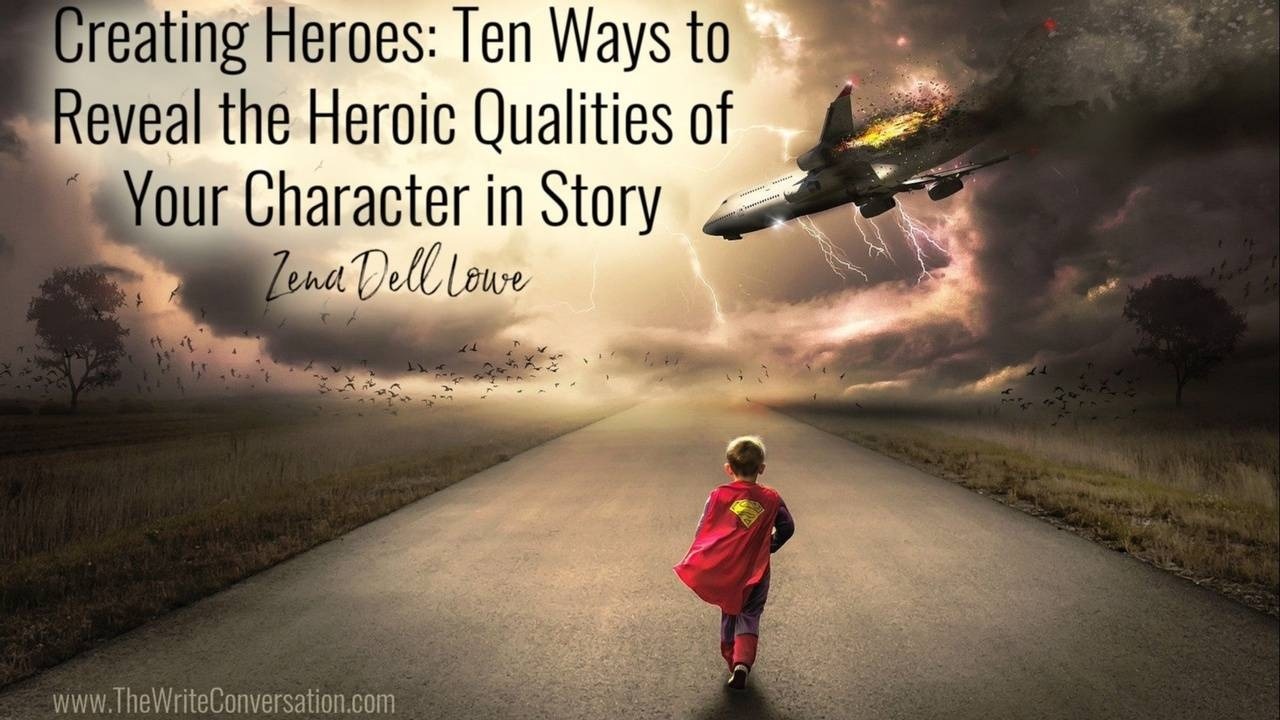 One of the things that's really important for you to learn as a writer is how to create heroic characters. With only a few exceptions, your main character becomes the hero of your story. Therefore, it’s your job to show the audience that they are genuinely heroic. But that begs the question, how, exactly, can that be accomplished? How do you reveal to the audience the noble qualities of a hero that your main character ought to possess?

The following list identifies 10 things that you can do as a writer to help reveal the character qualities that a true hero must possess. This list is by no means exhaustive. However, it should at least get your imagination working. Today, we’ll discuss the first five.

On my podcast, The Storyteller's Mission with Zena Dell Lowe, I've talked about the fact that true character is revealed by the choices a person makes under pressure. When your main character is placed in a high-pressure situation, how does she react? Does she crumble under the weight of it or does she rise to the occasion? The key is to construct scenarios that force them to think fast on the fly, which in turn allows us to see what they're really like on the inside. Do they have what it takes? Are they ultimately selfless and brave? Or do we discover that deep down, they are really selfish and cowardly? People are like grapes -- when you squeeze them, you see what's on the inside. Consequently, the number one way to reveal noble character qualities in your story is to put your character into extremely stressful situations and let us see how they react under pressure.

As your story ramps up to the ultimate climax and final conflict, your character will inevitably offer some sort of solution to hopefully save the day. But whatever solution they offer, it shouldn't be one that we, the audience, would think of ourselves. In fact, it shouldn't even occur to us. Think about Captain Kirk, played by Chris Pine in the new reboot of the Star Trek franchise. We regularly observe Captain Kirk suggesting things that the others on the Starship Enterprise regard as sheer madness. But the whole reason why Captain Kirk is the right man for the job is precisely because he thinks outside of the box. He comes up with plans that nobody else would ever think of, and so should our characters.

For example, maybe they have to work with an enemy or a former love interest against whom they have a personal grudge. However, whatever’s happening in the “real world” of the story is ultimately bigger than your character’s grudge, so he has to set aside his personal grievances in order to face the bigger conflict. When you create a situation that forces your character to have to temporarily ignore or stuff his or her own wants and desires, it ups the stakes of your story, and it puts even more pressure on your characters. Sometimes, it can even add a level of humor or emotional intensity to the story. After all, there’s only so much a character can take!

For example, if you have a character that's bringing a bad guy to justice, he needs to do it in a manner that is consistent with his respect for the dignity of the other person's humanity, in spite of all the bad things that the bad guy might have done. Your main character can take satisfaction from the fact that he's bringing a bad character to justice, but he can never take a perverted pleasure in it for himself. In other words, a hero’s motives ought to be pure, or if they’re not, he needs to realize this and be struggling inside of himself with this issue. The bottom line is that to truly be heroic, your character can't be doing his job out of some kind of selfish motivation, like wanting glory or revenge or to get career props or whatever the case may be. He needs to be doing whatever he's doing because it's the right thing to do. Otherwise, he ceases to be heroic.

Your heroic characters must have a cause greater than themselves. They must be guided by something that goes beyond their own personal desires or feelings. Even John Wick was forced to adhere to “the rules” of the high table. There need to be principles in the world of your story that are bigger than the character himself. Otherwise, everything he does will inevitably be self-righteous. But when they have true guiding principles (like the ones we have in Scripture, but even the rules in John Wick will do), your character’s submission to those principles in spite of their own personal feelings or inner conflicts makes them even more noble in our sight. They need to have something bigger to believe in than just their own personal feelings.

Part 2 of this post will cover the next 5 on the list, so check back here next month for the conclusion of this topic. In the meantime, if you’re interested in getting more tips like this, check out The Storyteller's Mission with Zena Dell Lowe, a podcast for artists and storytellers about changing the world for the better through story. New episodes are available every Thursday on the podcast app of your choice.

Until then, may you go forth inspired to change the world for the better through story.

Here's my latest article for The Write Conversation, an award-winning blog where I'm a monthly contributor. Click the link to read the full article on the Write Conversation Blog: https://thewriteconversation.blogspot.com/2021/03/creating-heroes-ten-ways-to-reveal.html