Why the World Needs Stories about Heroes - Part 2 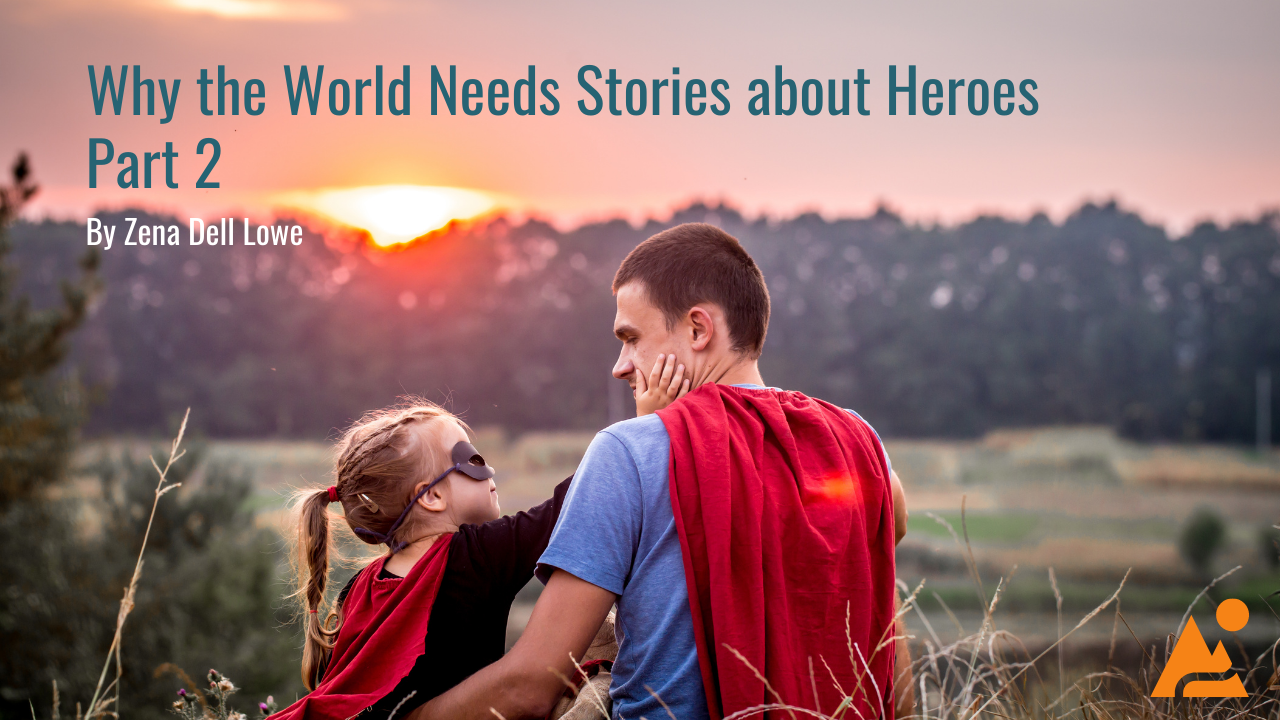 When you think about heroes, what comes to mind? Somebody from your family? Superman? Maybe an historical figure who did something great? For me, the word “Hero” makes me think of my stepdad, Ralph, who married my Mom in spite of the fact that she had three little kids at home. He loved each of us as if we were his own -- something few men would have done.

As it turns out, this conception of a hero isn’t too far off the mark. The ancient Greeks lauded heroes as mortals who had done something so far beyond the normal scope of human experience that they deserved to be worshipped as gods. Even Medea, who murdered her children, left an immortal imprint behind. To the Greeks, heroes need not be morally good. They need only be extraordinary, which was meant to expand our own conceptions of what was even possible for human beings.

To be extraordinary, then, is an essential component part of a hero, which has endured throughout history. In the wild west, our heroes included outlaws and murderers like Billy the Kid, Butch Cassidy, and even Calamity Jane, who broke the conventions of ordinary women and became one of the best gunslingers of the west. All three of these were called “heroes.” Why? They were extraordinary.

We need our heroes to be exceptional above all else, and we seek out these types of people in real life. All over the world, we search for amazing and unique people that we can admire and venerate, which I think speaks to the way God designed our hearts. He created us for worship, and heroes represent something greater than ourselves for us to adore. They exemplify what it means to live life to its fullest and transcend the tedium of everyday life.

Today, being a hero means not only performing great feats, but also doing so in a morally righteous way. We see a hero as someone who upholds our highest standards of morality even as they help define the limits of our aspirations. The only people we call heroes are those whom we admire and wish to emulate. As Scott LaBarge wrote, “Our heroes become symbols to us of all the qualities we would like to embody and all the ambitions we would like to satisfy.”

But what does all of this have to do with us as storytellers? For one thing, it gives us insight into the kinds of stories we should be telling. Society may be growing evermore cynical, but we still have a chance to make a difference. When we tell stories about extraordinary people who do extraordinary things in an extraordinary way (i.e., for the morally right reasons), then we give people heroes who are worthy for them to emulate and who inspire them to be better than they are.

Perhaps this seems like a tall claim, but consider the power of the Marvel cinematic universe to penetrate the collective psyche of the human race. Regardless of age, race, ethnicity or gender, these stories captured the imaginations of people from all cross-sections of society, from every country, on all continents, all over the world. If you're not into these types of stories, you may not fully appreciate the phenomena that is the marvel cinematic universe. There's something powerful there. Something extraordinary. Which is why there’s never been a better time to be a storyteller.

This opportunity has been made even greater by the fact that we rarely look to real life heroes anymore. We’ve become increasingly cynical about putting our faith in actual historical figures because every icon has been knocked down and exposed as a fraud. We’ve come to accept that human beings are fallible. We expect them to let us down. And the more we discover about our former heroes, the more disappointing they become. Thomas Jefferson, one of America's founding fathers and the primary author of The Declaration of Independence, was also a slave owner. George Washington, the military general of the revolution and arguably the greatest American president who ever lived, also a slave owner. People everywhere are rejecting these men whom we once considered heroes and patriots. But they violated our modern sensibilities, and therefore there’s a movement to rewrite history and denounce them as traitors, to tear down the so-called symbols of white privilege upon which this nation was built.

By the way, it should be noted that this dismissive approach is both short-sighted and hypocritical. If we could but abandon our legalist demands for perfection, we might see how their human foibles actually give us hope. If these men, who are clearly flawed, can still rise above the trappings of their human weaknesses to accomplish something great, then why shouldn’t it inspire us to throw off the yoke of our human foibles to go and do likewise? These men are like us - broken and depraved - which means it’s possible for us to transcend the frailties of our nature. Sadly, this is not the perspective being taken today. Instead, we demand and expect moral perfection, and if they fail to live up to it (as they inevitably will), we discard them and decry them as villains.

This reality of our modern world makes my heart heavy, but it also presents an unprecedented opportunity. The need for fictional heroes has increased. Having learned that real human beings are unreliable or untrustworthy, we’ve ceased to put our faith in them. Better to protect ourselves now so that we're not disappointed when the real truth comes out later. And this cynicism is understandable as a natural consequence of human sin. Consider the myriads of sexual scandals over the years, even by so-called godly men. The sins of the Christian community have done as much to blaze a trail to cynicism as the nihilistic philosophies of the age. We know everyone has skeletons in their closet. We know everyone will fail us in the end. But the upshot of all this is that there’s a void of heroes in the world, and as storytellers, we have a chance to fill it.

If we cannot look to real life people for our heroes, we will by necessity look to fictional ones. Fictional characters are worthy of our devotion because they are better than real. They won’t let us down. We can handle their weaknesses because we know them in a way we could never know a real person. We trust them, even though they're flawed, because we know who they are deep inside.

Notice one of the key differences here. Whereas we demand perfection in real human beings, we accept imperfection in our characters. This means that our fictional characters can and should be flawed. However, they must be flawed in a way that allows us to comprehend them. We tolerate and forgive their sins because we understand what's behind those sins, and we see beyond their shortcomings to the heart. The world is complex, but stories give it form. Stories make heroes accessible.

People are looking for heroes today, and they're terrified to look to real people, which means we have a unique opportunity as a community to write stories with heroic characters at the center. In my next post, I’ll break down how we can maximize this opportunity in a powerful and practical way. Until then, just remember, even a little boy can be a hero if he says he's not hungry when he sees that there's not enough pie to go around. Join me on this deep dive into heroism and learn to write stories for such a time as this.

Why the World Needs Stories About Heroes – Part 2